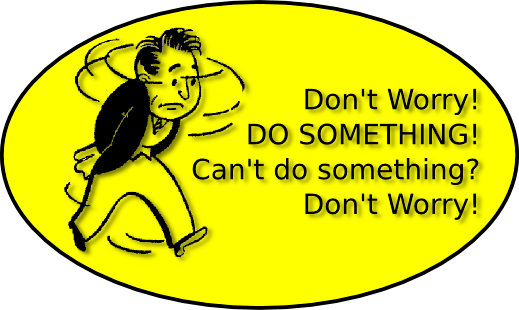 I can still remember it like if it were yesterday. We were visiting our family in New York City for the first time. It was late in the evening of the 3rd of September 1988, we had had a crazy day walking and visiting different tourist attractions. Suddenly, in the middle of dinner at friends, labor pains started, my then sister in law had overdone it, her husband all excited and scrambling to get everything needed to take her to the hospital, didn't know where up or down was. Faster than what I could have imagined, 5 of us, all crammed in their small Hyundai, were driving to the hospital.

I don’t remember why, but when we got there, 3 of us stayed in the car while my sister in law and her husband went into the hospital. We were worried, is the baby coming now? Is everything all right? Had she overdone the whole ‘touristing’ thing?

And then it happened! On the radio this amazingly simple reggae style song started playing: “Don’t Worry, Be Happy!” by Bobby McFerrin. Immediately we knew everything was gonna be all right, and it was. Two hours later, a new healthy beautiful baby had arrived in this world.

Listening to that song over the years after that, has always brought a smile to my face. There is so much truth in that song, specially because worrying seems to be the number one sport for lots of people on this planet.

Which begs the question:

How can you control your worries and, like the song says, be happy? For that, you first need to understand...

Let me be clear about this, we ALL tend to worry, it seems to be a very “human condition” and it’s very well and strongly attached to our ability to imagine. So, this is not about not worrying AT ALL. I don’t think it is possible to eliminate worrying completely. Like I said, it’s part of being human.

I personally see worrying as a type of fear. Fear is acute, you have to react immediately. It activates your “fight or flight” response at once, although sometimes it just paralyzes you.

With fear, be it real or imagined, you’re reacting to an immediate threat. You have the feeling of being in danger and therefore you have this immediate sensation of apprehension.

Worrying, on the other hand, is more like a delayed fear, a “chronic fear”. It’s normally NOT a response to an immediate threat, and it’s mostly in our heads.

Let’s say, for instance, you recently watched in the news that someone was mugged and ended up dead. This happened at the other side of the country and there are no reasons to believe that it’s happening in your neighborhood.

For whatever reason though, on that day your son (let’s assume you have one) is not coming home at the expected time and, in fact, it’s getting late and you haven’t heard anything from him. What’s your reaction? What do you imagine has happened? What goes through your head?

For a lot of parents, this would be a very stressful situation. The movies in their head would start playing all kinds of horror scenarios. I don’t wish to go into the details of what people imagine, but I’ve heard and witnessed some very extreme ones and to tell you the truth, it’s not nice.

The sad part though, is that at that particular moment, when you have NO IDEA what’s going on and everything is happening JUST IN YOUR HEAD, your body reactions are just as if what you’ve imagined had actually happened in real life. And that’s where the problem lies.

But let’s backtrack a little bit and examine what actually happened. Did you notice my emphasis on the fact that it all takes place IN YOUR HEAD? That’s the problem with worrying. It’s, in my opinion, the worse use you can give to your God given ability to imagine stuff.

Even worse, over 99% of what you imagine NEVER HAPPENS. In most cases you’ll discover that your son was just distracted with something and totally lost track of time. And that is just ONE example, I could give lots!

The point of this article is not to prove that people worry. I don’t think that needs proving at all, we all know it happens.

Why do we need to do something about it then, if everybody does it? Because the amount of EXTRA STRESS that a worrier causes himself or the people surrounding him, is not healthy.

Stress, according to this Scientific American article, makes our immune system less effective, because it actually elicits an immune response itself. And doing this ‘chronically’ weakens the whole defense system of your body.

What happens when your immune system is compromised? I guess the answer is obvious. But here is a list of things that, according to the Mayo Clinic, show you're under too much stress and your immune system is being affected: headaches, muscle tension or pain, stomach upset, fatigue, sleep problems and more.

Notice one thing though, worrying starts in your head, as ‘what if’ scenarios that could or could not happen. Your brain uses a reconfiguration of your past experiences to create an imagined future that most likely is not going to become reality. You play these movies to yourself and, if you keep doing it, your brain believes it’s happening for real, causing a VERY REAL stress response. Which, in turn, causes a series of VERY REAL effects to the detriment of your body.

Do you see how it can go from ‘imagined’ to ‘very real’? That’s the problem of constant worrying!

How to handle worrying?

In order to get a firm grip on your worrying, you need to first define what you’re afraid of. Remember, worrying is closely related to FEAR. So, what are you really afraid of in this circumstance that’s worrying you?

Once you define that, you have to ask yourself what would be the worst case scenario. However, remember that this scenario happens very, very seldom. On top of that, just worrying in advance about the possibility of it occurring, achieves absolutely nothing.

You need to confront worrying with this motto on a consistent basis:

“Don’t worry, DO SOMETHING;

you cannot do something?

It doesn’t mean that you shouldn’t worry. That, as mentioned, is almost impossible. However, when you discover yourself worrying, think immediately “What can I do now?”.

Now notice the second part of the quote: “You cannot do something? Don’t worry then!”

It implicitly accepts the fact that, sometimes, there is nothing you can do. In these cases, it highlights the truth that, if you can’t do anything, to keep worrying will achieve LESS!

Keep in mind (pun intended) that worrying happens completely in your head. It’s the worst use of your imagination possible. So, make your best effort to control the movies and, like a movie director, make it a happy ending!

But what if the worst case scenario DOES HAPPEN? - You might ask.

Let me ask you a question: Do you think worrying helps in this case? NO! It simply makes you suffer twice! Once in your head, in advance and another one in reality. Wouldn’t it be enough just one time?

On top of that, realize that, when something goes really bad, it’s most likely unexpected. It will take you by surprise.

Worrying by itself achieves only one thing. It’s letting you know that you’re afraid of something. Once you’re AWARE of that, you can start taking action. Ask yourself what you’re afraid of? Define that and make a plan to confront the worst case scenario.

Remember, the worst case scenario happens VERY SELDOM and when it does, you don’t want to inflict pain to yourself twice. Would you?

Worrying happens solely in your head and it’s the worst use of imagination possible. But you can be the director of your own ‘head movies’ and give them a happy ending. Which, in reality is what happens most of the time anyway.

Since worrying is such an automatic process, you need to find a way to interrupt that pattern and start being AWARE of what you're doing. To achieve this, you might need to recruit the help of a friend or a coach that brings it to your attention when you go into the endless loop of worrying.