How To Get What You Really Want 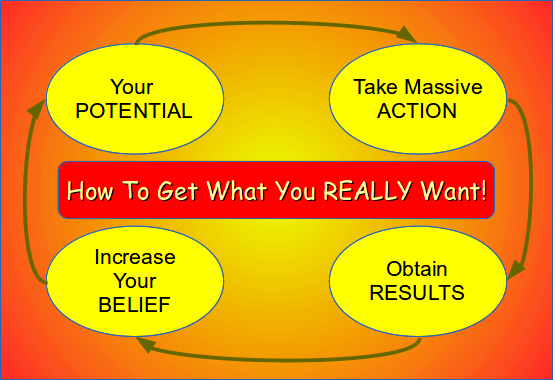 Obviously, to be able to get what you REALLY want, you first must know WHAT IS IT that you want. You have to have clarity in that respect.

Once you know what you really want to achieve in life, how do you go about obtaining it?

This is something that actually should be taught in school, because we ALL want something but only few actually know how to systematically go about obtaining it.

Don't get me wrong, knowing the HOW TO won't guarantee that you will obtain anything. Why is that so? Well, no matter what, obtaining what you really want in life requires EFFORT on your part. It also most likely will require TIME. But if you're consistent in your applying of whatever it is you wish, you WILL eventually obtain it, if you don't give up.

So, let's get down to it and see what specific steps are a must to make your dreams a reality. Let's start at nothing and see how it goes up in a spiral like fashion.

As I said at the beginning, you have to FIRST know what you really want to achieve. But, you also have to BELIEVE that you have the innate ability to obtain it. In other words, you have an untapped POTENTIAL to achieve what you want.

Notice that all this happens FIRST in your head. This is the reason why the 'Law Of Attraction' states that THOUGHTS have power. It ALL starts in the mind. And, if we're honest, it's 100% true. Look around yourself, wherever you are. Do you see something created by humans? Of course you do, otherwise, how the hell are you reading this? 🙂

If you stop for a second, you'll have to accept that EVERYTHING humans have created, started FIRST in their mind. They had an IDEA that was the starting point for their creation.

The same with you! Your mind has the potential, through THOUGHTS and IDEAS, to create any type of reality for you. You just have to believe this is true. So, to start, you go from NOTHING to having an idea, a wish or a goal that you want to achieve. This is YOUR POTENTIAL!

Now imagine the first person, thousands of years ago who THOUGHT "Damn, I don't want to eat off the floor anymore. My back hurts and I'm tired of bending all the way down. I guess I could elevate everything and put it on some platform. That would be easy to reach and my back won't hurt as much. Hmmm!"

What did he have to DO now? Well, the fact that we do have TABLES now, proves that he did TAKE ACTION and created a table, I don't care how rudimentary it was, it was something. Maybe three legs instead of four, we don't know, but SOMETHING was done. Somebody else must have seen that and a viral trend was established to the extent that the majority of humanity uses tables now. So, what was the KEY of his success? TAKING ACTION!!!!

So, once you have your IDEA, WISH or GOAL, you have to TAKE ACTION. The more action you take, the better. In fact, 'self-help gurus' talk about not just 'taking action', but about 'taking MASSIVE action'. Only if you DO SOMETHING, something will happen with your idea, wish or goal.

When you take action, your thoughts start 'materializing' themselves. When I say this, it sounds VERY logical and it has nothing to do with the 'esoteric'. It's just common sense, you could even think. But, you'd have no clue of the amount of ideas that have just 'evaporated' because their creators simply didn't take action.

Once you take actions, something amazing is going to happen. You'll get RESULTS!

Ok, maybe the results you get at the beginning are not exactly what you were expecting, but you WILL get some sort of result. Think about this. What if you just 'can't be bothered' doing anything, what kind of results would you get? That's easy to figure out... NOTHING!

But if you do SOMETHING, you WILL get some results. Getting results basically means that you've set a cause in motion. In other words, you've started a chain reaction that will have some kind of effect in the end. If you keep doing that, it will eventually produce the result that you want and, even if this result is small, it should be something to celebrate!

As a way of understanding this, it will help to consider for a bit what's a classical plot in ALL movies that deal with 'TIME TRAVELING'. And what's that? Well, that if you CHANGE something in the past, it will cause changes in the present. Isn't it true that EVERY single time travel movie or book deals with that? Well, it's time for you to realize that TODAY is tomorrow's past, and if you change something TODAY, it will cause changes in your future, just make sure that future is more in line with what you really want.

"TODAY is tomorrow's past,and if you change something TODAY,it will cause changes in your tomorrow!"

Step 4 - Your BELIEF of what is possible

Let's go back for a second to step number 1. Remember, you had to BELIEVE that you had the potential to achieve something. At that moment however, it was just something that you 'potentially' could achieve. You've never done it before. It was more like Faith!

Now, however, you've produced RESULTS and these prove that you CAN achieve more than what you've achieved so far. Your potential has become reality and your FAITH/BELIEF grows exponentially and turns into CERTAINTY. Obviously, having results under your belt gives you confidence that you can do more. And through this, your potential increases.

Think about the Olympic athletes trying to break records. At the beginning they just believe or have Faith they can, but they've NEVER done it before, but then, they DO IT! That gives them more confidence and then they go ahead, take action by practicing consistently and after a while, they break their previous record and sometimes that goes on and on several times. Why is that? It's because every time you achieve something, your mind sees it now as NORMAL and the bar gets set a bit higher.

What happens is that once you get to that point of believing you can more, you automagically go back to step 1, but with the bar set higher, which results in more and so, you end up achieving much more than what you thought was even possible for you at the beginning.

If you keep consistently on a path like this, do you think you'll get what you want? You bet!

Just To Be Clear

In this entry I've described the general path, which successful self made people go through to achieve their sometimes unbelievable goals. They never go from 0 to success in 1 second. There are ALWAYS steps in between that the public might not have seen, but that are always there.

On the other hand, there is always the possibility that you'll hit obstacles on your path to success. You might not get the results that you want, once you start taking action. What to do when this happens? Just give up and stop? Never!

If it is what you expected, RINSE AND REPEAT!